Men’s Euro Cup, Quarter-finals, 1st leg – Summary
OSC hits 17, close to the semis, like away-winners Szolnok and Zvezda
Two home wins, two away victories, 94 goals – the first leg of the Euro Cup quarters offered the best of water polo action. Of the two Serbian sides, Crvena Zvezda claimed a crucial win in Moscow, while the other, Radnicki fell behind at home after losing an epic battle to 2017 Champions League winner Szolnok. The Hungarians enjoyed another great day as OSC came up with another scoring festival after the eight-finals and by netting 17 to Sabadell they are perfectly positioned to reach the semis. Only a single goal separated Mladost and Vouliagmeni, here the second leg promises thrilling moments next Wednesday.
Quarter-finals, 1st leg: Dynamo Moscow (RUS) v Crvena Zvezda (SRB) 8-11, Radnicki Kragujevac (SRB) v Szolnoki Dozsa (HUN) 12-14, HAVK Mladost Zagreb (CRO) v NC Vouliagmeni GRE) 11-10, OSC-Budapest (HUN) v Astralpool-Sabadell (ESP) 17-11
Second leg: 24 March
Just like in the previous round against French side Tourcoing, Crvena Zvezda came up with another three-goal away win, this time in Moscow. The hosts could lead only once, at 3-2 in the first, then three connecting goals from the Serbs set the course of the game. Once they jumped to a three-goal lead with a double in 35 seconds to go 4-7 ahead, the Russians could never get closer than two goals. In fact they trailed by four in the last quarter only to pull one back 2 seconds from time. Still, Zvezda is on its way to the semis.
OSC is close to the semis too as the Hungarian side switched to scoring- machine mood once more after spreading 42 goals in the eight-final round. Sabadell surprised them in the opening period by taking a 2-4 lead but the hosts hit back with a devastating 5-0 second period. They could shut out the Spaniards for 11:28 minutes while going 9-4 ahead. Sabadell had one last surge late in the third and came back to 10-8 but OSC had another great run in the last quarter. They added six goals, two in the last 50 seconds to claim a huge 17-11 win.
The other Hungarian great Szolnok played the highlighted match of the quarters with Radnicki and their encounter was up to the expectations. It turned into a 26-goal epic with a lot of actions, 29 major fouls and some outstanding individual efforts. Though the visitors jumped to a 0-3 lead but Radnicki came back to even and held on for 6-6 till halftime. They even took the lead early in the third at 7-6 but Szolnok hit back with four goals to go 7- 10 up and that put them on track. The Magyars had two man-ups early in the fourth to take a four-goal lead at 9-12, including one when the hosts’ goalie was excluded, but the Serbs offered some heroic effort in defence and soon

PRESS RELEASE
LEN PR 18/2021
they trailed by only one. Strahinja Rasovic enjoyed a great evening, netted five, Aleksa Ukropina scored four, they were instrumental in keeping Radnicki in the match. Still, some lucky bounce helped Szolnok – two deflected shot tricked the hosts’ goalie in the fourth – and they could keep a two-goal difference till the end.
Mladost and Vouliagmeni produced the most balanced contest of the day. It was 6-6 after two periods, then after four minutes of hard battling the Greek took the lead once more, then the Croats hit back with two in the last 92 seconds of the third. The Greeks could equalise twice early in the fourth but the two veteran centre-forwards Josip Vrlic and Cosmin Radu netted their third respectively lately to give Mladost an 11-9 lead. But Vouliagmeni could convert its last man-up 7 seconds from time and that could be crucial for the return leg in a week time.
For detailed results, stats, play-by-play visit:
http://len.microplustiming.com/leneurocup/indexCL_web.php?cal=1
17 March 2021 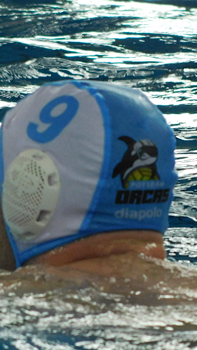