Croatia wins epic match against Serbia, can play for gold with Spain

In the showdown between the reigning world champion and the Olympic champion, Croatia came from behind to beat arch-rival Serbia in front of 2,000 enthusiastic fans in Rijeka. The hosts can play for the title with Spain in the men’s Europa Cup Super Final, while Serbia faces Italy in the bronze medal game.

Whenever Croatia and Serbia play, all eyes are set on the pool and this game of the two giants has become another epic chapter in history. Serbia got the better start, and it was a way better start indeed since they managed to hold the home side on a single goal for two periods while taking a 4-1 lead. But the Croats showed the character of a world champion team as they got back to life in the third, began to make their 6 on 5s and found the ways to launch counters.

The Serbs were still 5-4 up before the last period but two fine goals in 83 seconds put the hosts ahead for the first time and much to the joy of the 2,000 spectators filling every corner of the place. Though the Serbs equalised twice, Croatia didn’t let it go: they were 0 for 5 in the first half in man-ups, they made 3 out of 7 in the second while the Serbs could score only three goals in the entire second half.

For this, Croatian goalie Marko Bijac deserved all praises as he came up with a performance once more which had also made him the best European player for 2017 and the recipient of the LEN Award. The trophy was presented him before the game by LEN President Paolo Barelli.

Croatia could earn back-to-back wins against their arch-rivals as they could beat the Serbs again after their magnificent World Championships semi-final win in Budapest. It means they will play with Spain for the title and the €20,000 top prize while Serbia should face Italy for the bronze.

Italy earned that opportunity by beating Greece with a convincing performance. They rushed to a 4-1 lead and never looked back, clinching the second place in Group A. Hungary moved to the third spot here as they managed to restore some pride by downing Spain 13-7 and offering some typical Magyar spectacle for those remaining on the stands (the Spaniards finished atop anyway). The Hungarians will go for the 5th place with Montenegro – the latter one had an easy ride against France and earned its first win here.

Two goals in 23 seconds boosted Italy’s early surge to go 3-1 up in the first period while the Greeks missed three man-ups. The third one was especially painful as Francesco di Fulvio scored from the ensuing counter with 2 seconds remaining and that gave Italy a 4-1 lead.

The second was somewhat more balanced, Georgios Dervisis netted two for Greece but a double also arrived from Italy’s Argentina-born leftie Gonzalo Echenique, both of his action goals were real beauties. Though Greece could come a bit closer early in the third after Ioannis Fountoulis collected a rebound among adventurous circumstances for 6-4 but the Settebello replied from a 6 on 5 to reset the three-goal gap. Greece managed to kill four Italian 6 on 5s in the rest of the period but didn’t have enough energy to set up fine chances in offence and also missed a man-up. That turned out to be crucial as Francesco di Fulvio could rush away after getting the ball in the back and finished his one-on-one for 8-4.

The trend didn’t change in the final eight minutes as Italy managed to put away two man-ups, Guillermo Molina’s backhanded shot after a rebound was one of the most spectacular goals in the tournament. Though the Greeks found the way to finish their man-ups at this stage, it didn’t bring them closer and finished the prelims with a draw and two defeats, while Italy secured a chance to play for the bronze medal on Sunday.

A nice lob and a penalty gave France what they never had before in this tournament: the lead in hand. It happened in the first quarter as the French learnt the lesson from the opening day when Croatia rolled over them in eight minutes. On the second day they withstood the pressure against the Serbs at least in the first half while now they could even go ahead while playing with Montenegro.

Though this charming period didn’t last long as the favourite side netted two 6 on 5s in quick succession and added one more early in the second for 2-4. However, the Montenegrins didn’t gear up in the coming minutes and they were not dominating the game that much as did the Croats and the Serbs on the previous days. A nicely played man-up halved the gap soon and the French had to possessions to equalise though couldn’t impose much threat in these attacks. Though Montenegro also netted one from a 6 on 5 – finished with a lob, something rare in man-ups – but the French could also bury their extra with 13 seconds to go, so the score at halftime looked fine from their angle (4-5).

Montenegro tightened up in defence and lifted the level of focus in front as well and soon it became visible on the scoreboard. After 5-6 they scored three connecting goals in 2:38 minutes to go 5-9 and move out from the ‘danger zone’. They didn’t go on scoring, though, and the French could narrow the distance despite missing a penalty. Just before the end Sasa Misic netted a brilliant goal from the centre to end the match in a positive manner for Montenegro.

The biggest match of the day – and perhaps of the whole tournament – made waves in Rijeka, temporary tribunes had to be added around the pool and all seats were filled by the beginning, some 2,000 people gathered to see which team would make the final.

Filip Filipovic started the scoring with a fine blast from a counter, the Croats missed their first 6 on 5 but also killed the Serbs’ man-ups, two in a row. Then the other great leftie, Maro Jokovic also netted one from a counter to level the score. However, the Serbs were on target from their next two 6 on 5s, the first was a great shot from Filipovic, the second was a lucky push from Dusko Pijetlovic after a rebound. At the other end the hosts struggled in their extras, though credits should be given to their rivals who did a great job in defence, reserving the two-goal lead until the break (3-1).

Another 6 on 5 gone for the Croats at the beginning of the second and even if the Serbs also missed one, they could score in the next, Dusan Mandic did the damage. And the scoreless phase for the hosts didn’t tend to end soon, they couldn’t make another man-up (stood 0 for 5 at this stage, the Serbs were 3 for 7), when the buzzer went, 12:18 minutes had gone without a Croatian goal while the visitors led 4-1.

After the middle break a different team arrived back to the pool from the home side: this time luck took their side when Loren Fatovic’s shot slipped in under the hand of Gojko Pijetlovic, then Ante Vukicevic netted a two on one counter to take the fans on their feet. Marko Bijac’s save in a man-down further fuelled the enthusiasm of the locals and soon the Croats earned a 6 on 5 to go even but they played it quite poorly after a time-out. The Serbs didn’t do them a favour to commit the same mistake and Dusko Pijetlovic put the ball away from their man-up. It was a crucial part of the game, instead of 4-4 it stood 5-3 and Croatia couldn’t find the hole on the Serbian wall on the next occasion playing in 6 on 5. They made the third, though, for 5-4 with 46 seconds before the last break and this time the Serbs made a miss in extra in the last moments.

And that hit back as the Croats scored in their first possession, Luka Loncar pulled the ball in from close range for 5-5 and they rolled on soon: despite a missed man-up, Ante Vukicevic sent the ball home from a counter while the Serbian defenders messed up the marking. As usual, Filipovic came to save the nation, his trademark 5m shot found the back of the net for 6-6 and Gojko Pijeltovic came up with a big save in the next man-down.

The game heated up, the Serbs had two man-ups but couldn’t make either, first the post saved the Croats, then Bijac, what’s more, Fatovic managed to score from the ensuing counter. With 2:17 go the hosts led again 7-6, but the Serbs kept their nerves and netted the next 6 on 5 for 7-7. Still, this score favoured the hosts because of their better goal-difference, however, they went further as they managed to bury another man-up for 8-7 with 1:24 remaining. The Serbs’ goal was disallowed because of the 2m rule violation with 1:00 on the clock, so it was over – after the World Championships’ semi-final the Croats managed to beat their arch-rival once more and can go for the gold with Spain on Sunday.

The Hungarians were out to restore some pride after a draw against Greece and a bad loss to Italy. Their task looked a bit easier due to the fact that Spain had already secured the top spot in the group so had nothing to lose or win in this encounter.

The different approach was visible right from the beginning, Marton Vamos netted a fine 5m shot in the first possession and this was followed by a double by Krisztian Manhercz while the Spanish lacked their usual fire in front so Hungary led 3-0 after eight minutes.

A couple of minutes later the Magyars were 6-1 up already but before it would have turned into a demolishing, the Spaniards could find a brighter spell and netted three connecting goals to bring back the tension to the match. The cooler came from Krisztian Bedo who scored a fantastic goal from the centre, beating the defender and the goalie alike (7-4).

Though Spain came closer from a nicely carved 6 on 5 but the Magyars replied with their best spell in the tourney, scoring four goals in a row – Szilard Jansik made a hat-trick in 2:30 minutes –, each of them being worthy of their rich traditions. Then, as a bonus, Bence Batori blasted one from 12m for a 12-5 lead, to cause some noise on the stands. The game was done, though, the fourth period went down amidst calmness as the Spaniards’ brains were already focused on the final perhaps. 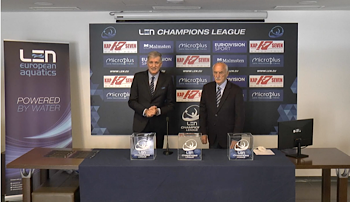